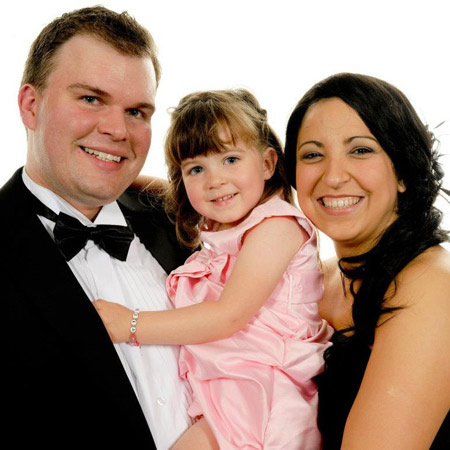 What a fighter Samira Furniss is!! It was New Year’s Day 2010 and Sam was enjoying herself at home with her husband Michael and newborn daughter Ella when she lost all the feeling in one side of her body. She was rushed to Rotherham Hospital where it was discovered she was discovered she was suffering from two aneurysms.

Sam was transferred to the neurosciences wards at the Royal Hallamshire were it was discovered that the aneurysms were dangerously close to three main nerves. It was impossible to carry out the operation in the usual way, via keyhole surgery as there was a risk that it would leave Sam paralysed. It was also discovered Sam had an extra bone in her head that they had never seen before and there were worries regarding her blood clotting.

In October 2010 Sam faced a 13 hour operation which was performed by a team of highly experienced surgeons. Sam even became a movie star as the op was filmed so that it could be used to train future brain surgeons!

Unfortunately a few days after the surgery it was discovered Sam had a huge blood clot on her brain and further surgery was required. The operation went successfully and the clot was removed but it left Sam unable to move or talk.

A year later and a very determined Sam is walking and believe us she is talking!!! She arranged a fundraising toddle around Rother Valley Country Park, a bag pack at Asda and a spectacular ball at the Royal Victoria Holiday Inn resulting in an amazing £13,348 being raised for Headway and Neurocare.

Sam says “It’s been really tough, such a tough journey, but I am proof it can be done. I was determined I would talk and I would walk again. My aim at the ball was to have at least one dance and I certainly managed that.”

We think you’ll agree Sam is one plucky lady and you can’t help but love this infectiously happy and optimistic lady. We wish Sam, Michael and Ella all the best for the future.