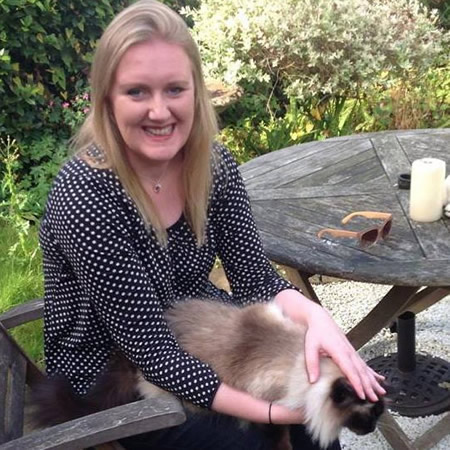 Joanne Patterson survived major brain surgery and after a slow recovery process was delighted to complete the Neurocare Fox Trot Trail this summer.

When Joanne was 23, she hit her head on a cellar ceiling causing concussion. A few days later Joanne collapsed.

X-rays and CT scans were taken to check for damage and this is when doctors found a lump on the brain. Later an MRI scan confirmed this to be an epidermoid cyst on the brain which had been slowly growing since birth.

“Looking back I probably did have symptoms of headaches and tiredness as a teenager but I just put it down to general teenage moans and groans.”

Joanne was advised that the cyst was inoperable as it was too risky and so she continued with life as normally as possible. She had regular MRI scans every year for the next 13 years and the cyst was not growing.

“I’d tried to put it to the back of my mind and forget about the fact I had this thing in my head, but I did have to be careful about doing anything that could be dangerous to the head so I tried not to do anything too adventurous.”

“I didn’t want to accept the fact that it was the cyst causing the problems so I kept putting it down to other things. But in March 2013 when I was driving I felt so tired I had to shake myself awake and I knew I had to go to hospital.”

The next hospital visit confirmed the cyst had grown and the impact had become too much for the brain to cope with and Joanne was told she would need to have it removed within 3 weeks.

“I was upset that it had finally caught up with me and I didn’t want to have it removed. Consultants Mr Battachary and Mr Sinha talked me through it and put my mind at ease about it all and I knew I needed to get my head out of the sand.”

In November 2013 Joanne had the cyst removed by use of the Endoscope equipment funded by Neurocare and immediately felt an improvement to her general health. “I had a lot of recovering to do but I also felt so elated and so happy to have just survived it, the feeling was amazing, it was the biggest rush.

Joanne had a slow recovery and rehabilitation after the operation but she pushed herself to do more and more a step at a time and we were absolutely delighted to see her take part in Neurocare Fox Trot Trail this July!

“I started walking small distances and at first it took me a long time to walk a short distance, but I gradually built it up and to be able to do Fox Trot was amazing.
I feel like I’ve been given a second chance at life so I’m a bit more “go get it” than I used to be. I’m doing all these things that I’ve been putting off for years…I just took a trip to Australia!

“With Neurocare you’re not on your own. People you don’t even know support you. The amount of care I have had is overwhelming. The shared support really helped me move on. Neurocare saved my life so I’m just so grateful to the charity and to the consultants. I just want to give back so that someone else can be helped like I was.”