Chris Bexon, aged 52 from Hoylandswaine, was diagnosed with a three inch meningioma tumour in his brain in 2016 followed by thyroid cancer in his neck just months later.

The tumour located in Chris’s skull had been growing for up to ten years and had re-shaped his brain, a seven and half hour craniotomy was needed to remove the tumour.

Now Chris has completed a bike ride from the coast of Morcambe to the coast of Bridlington to raise money for Neurocare and help other patients with similar conditions.

Chris’s symptoms began back in 2016 when he started to suffer from headaches which he put down to stress and fatigue, however after a few months he started to forget things and lost his balance.

He described the physical changes he was experiencing: “Originally when I had headaches I never took medications, I just got myself a coffee and they seemed to subside. But then one morning I had an almighty headache, it felt like my skull was being crushed and I asked my wife Alison for some painkillers.

“At that point she picked up the phone and told me to get down to the doctors because something must be wrong. I booked the appointment the same day whilst driving to work with Alison and I stopped at a red light.

“Alison asked me why had stopped and told me the lights were on green, then at the next set of lights which I thought were green, she told me to stop because they were red. I was having cognitive delay in processing information, it was like a time lag of a few seconds which was a really strange sensation – I wouldn’t have even noticed if it wasn’t for Alison.

“I visited the doctors and I did some hand eye co-ordination tests, which I passed with flying colours – well at least I thought I did. Based on this I got an appointment for a routine head scan at Barnsley General Hospital which revealed the tumour.”

“I wanted to raise money since the day I left the Hallamshire Hospital after brain surgery but I was never sure how I was going to do it.”

“My whole world dropped through the floor with shock and panic, I sat in front of the A&E registrar’s desk and they wouldn’t let me move. I was stunned by it all, we had our business to run, I had jobs to do and I was going to let everyone down and that isn’t what I do, I’m always a reliable and dependable person.

“I was due to have surgery on a Wednesday but the registrar at the Royal Hallamshire Hospital came to see me on Sunday evening – he had come with the consent forms for me to sign and said that they wanted to operate the next morning.

“I questioned this and was told that it’s surprising I’m still alive and the tumours size could cause a serious haemorrhage at any point resulting in my death.”

The tumour was called ‘Meningloma’ and due to its size had bent Chris’s brain completely out of shape. It was a rare Atypical Tumour at Grade 2, which after removal had the possibility of returning,

Chris said: “The morning of the operation, I felt numb, it was a strange feeling. I didn’t have a choice though, I would die shortly due to a haemorrhage anyways so I had nothing to lose.”

“I went into the Hallamshire Hospital ward N1, the ward was extremely efficient and my surgery was outstanding. They got it all out without damaging the brain which was one of the biggest risks, pulling brain tissue out with the tumour.

“In the recovery bay I remember being able to see, hear and then speak, things were looking good I could wiggle my fingers and toes.

“My next task was to get me to stand  up, but my balance was poor, I couldn’t walk – they sat me in a chair because I was so exhausted by it all, but I was encouraged to stand even though it was exhausting.”

“Brain surgery causes fatigue in a debilitating way – it felt like my batteries were going flat with no warning.”

A Craniotomy surgery has debilitating effects as the brain has to reshape and recover immediately from the trauma. The surgery took 7 hours 30 minutes to remove the tumour in its entirety.

Chris explained the effects the tumour had: “When I was told I could home I was ecstatic, but sleep deprivation left me feeling ill. I was  emotionally and physically exhausted. It was very difficult, every bump in the road shook my brain.

“I couldn’t even fasten my shirt the next morning, my left hand wouldn’t work properly so I just had to keep practising and a couple of days later, I managed it.

“It took me eight weeks to be able to walk 150m metres but after that I could walk an extra 50 meters every week which was a great feeling.

“Through all of this my wife was holding me together, driving me around, taking me to appointments, motivating me, calming me down, she was simply amazing.” 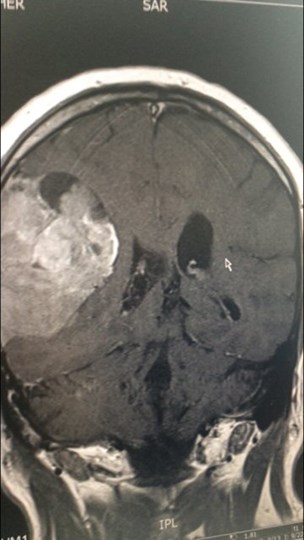 Then once both Chris and Alison thought they were through the worst of it all – a 2.5 inch tumour was found in Chris’s neck which was revealed to be Thyroid cancer. The cancer was called ‘Follicular Cancer’ and was successfully removed a couple of months later at the Royal Hallamshire Hospital.

Chris described his care: “The care at the Hallamshire for the operation was excellent and so was the follow up at Weston Park, it was first class and ran like clockwork. Both myself and my wife were hopeful this was the end of an awful time for us both.

“Since my operations I’ve put systems in place to help me with my memory because I have a fear of forgetting things – I’ve got reminders on my phone, notebooks to keep information in and I do really well but not as well as I know is possible.

“I joined a Brain Tumour Group on Facebook, I noticed someone mention they had got themselves an electric bicycle to get around on. I did some research and I figured it would help me regain fitness and help with the fatigue without putting too much strain on me physically.

“I was smitten with the idea, a little independence back in my life, it was invaluable in my early recovery.

“Brain surgery causes fatigue in a debilitating way – it felt like my batteries were going flat with no warning. It was like my brain just decided ‘that’s enough, I’m shutting you down’. I lost my attention span, interest, my strength/stamina/energy and I just wanted to sleep.

“The cycling helped me to reduce  this fatigue and it’s happening less the fitter and stronger I became.

Chris is now invited to attend an annual brain scan which so far have shown no sign of the tumour re-growing, and his latest blood tests gave him the all clear from Thyroid cancer.

“I wanted to raise money since the day I left the Hallamshire Hospital after brain surgery but I was never sure how I was going to do it until I spotted a group on Facebook raising funds for Rosa Robot for the Hallamshire and they were cycling Coast2Coast.

“I made a promise to myself that I would help to raise funds so I had to do something that was worth sponsoring and a close friend of mine Adam Read said he’d be my wing man.

“In March, I purchased a bike off the internet, rode it home and thought ‘what the hell have I done?’ I was exhausted and devastated at how unfit I was – but it was too late to cancel.

“I didn’t contact the charity Neurocare straight away as I was worried I wouldn’t be strong or fit enough. It was only when I managed a 25 mile ride with Adam that I decided to do it, there was no turning back.

“My resting heart rate has come down from 70 to 55, my brain is getting increased blood flow, I’m fending off my fatigue and my sleep pattern has improved. I can’t thank the staff at the Hallamshire Hospital enough for what they’ve done – they’ve given me my life back.”

Chris is now invited to attend an annual brain scan which so far have shown no sign of the tumour re-growing, and his latest blood tests gave him the all clear from Thyroid cancer. 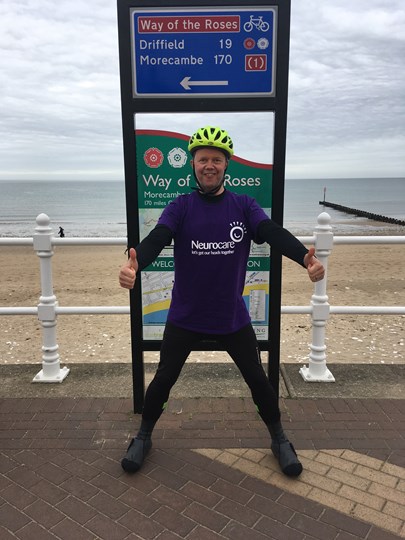 To give something back on a regular basis, Chris also volunteers on the Acute Stroke Unit every Tuesday afternoon as he finds he can relate to patients due to experiencing a similar thing himself.

This helps Chris take his mind of what he’s had to go through as he is able to concentrate on the patients and what they’re going through and views it as a mindfulness exercise for himself.

You can donate to Neurocare yourself here: https://www.neurocare.org.uk/donate-now/